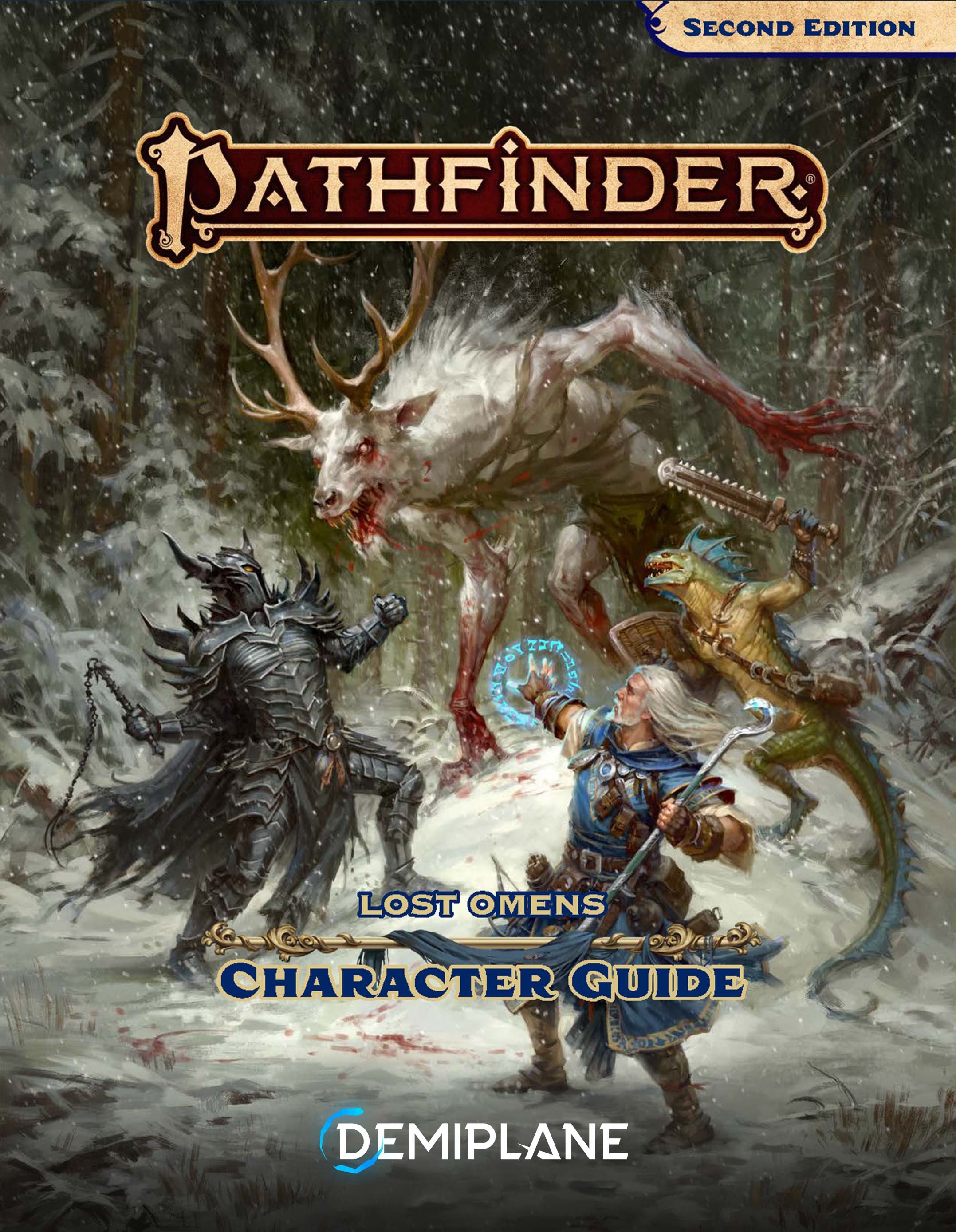 $39.99
An Explosion of Character Options!

An adventurer's life can be difficult, but long journeys and heavy burdens are easier when you have company. This guide to the world of Pathfinder presents the people and organizations that can help—or hinder—heroes like you!

The Lost Omens Character Guide features new heritages and feats for existing ancestries, as well as three brand–new ancestries for unusual heroes forging a place for themselves in an uncertain age. Join five of Golarion's most influential organizations, fight alongside the rank–and–file members provided in these pages, or clash against them in pursuit of your own passions and goals!

This must-have guidebook for characters of all types introduces three new ancestries to the Second Edition of the Pathfinder Roleplaying Game—the regimented and warlike hobgoblin, the plant-like leshy, and the inquisitive lizardfolk—provides 10 new heritages for the game's core ancestries, offers nearly 100 new ancestry feats, and presents 10 new archetypes to allow characters of any class to participate in the world's most notable organizations, from the adventurous Pathfinder Society to the rabble-rousing Firebrands to the magical masters of the Magaambya!

One of the most adaptable and populous peoples on the face of Golarion, humans have a myriad of cultures and ethnicities, each with its own history and traditions.

Originating far below the surface of the earth, dwarves were led by a divine vision on a mass exodus toward the sky, where they split apart into a number of different societies.

Alien visitors from a mysterious world, elves slowly adapt to the environment around them, becoming marked by the world even as they leave their own impressions upon it.

Refugees from the First World, gnomes throw themselves into whatever excitement and magic they can find or make for themselves.

Troubled by their ancestry’s violent history, some goblins are seizing their own fate and forging new paths to follow.

Often overlooked among the bigger people they usually love dwelling among, halflings spin their own tales and traditions in overlooked places.

Hobgoblins, leshies, and lizardfolk are new player ancestries from the Inner Sea region.

In a world filled with dangerous monsters and countless secrets, the members of Golarion’s various organizations work to achieve common goals, gain power, or even merely survive.

Whether they fight injustice or are simply in it for the glory, the Firebrands foil would-be tyrants and look good doing it!

In a wild and dangerously untamed world, these knights transform chaos into rigid order, even if doing so means wielding the iron chains of Hell.

Fighting a battle that seems already lost, the Knights of Lastwall persevere and shine bright in the face of pain and failure.

The oldest magical university in the Inner Sea region, the Magaambya blends arcane and primal magic in a practice seen nowhere else.

This influential association of explorers and scholars dispatches agents to dangerous and faraway places to investigate problems, collaborate with locals, and report their findings.

This section provides a pair of NPCs from each of the major organizations detailed in this book, ready to serve as allies for PCs or tools for the GM.

These simple templates can be applied to NPCs or monsters from the Pathfinder Bestiary to create custom adversaries or allies that strive to advance an organization’s goals.