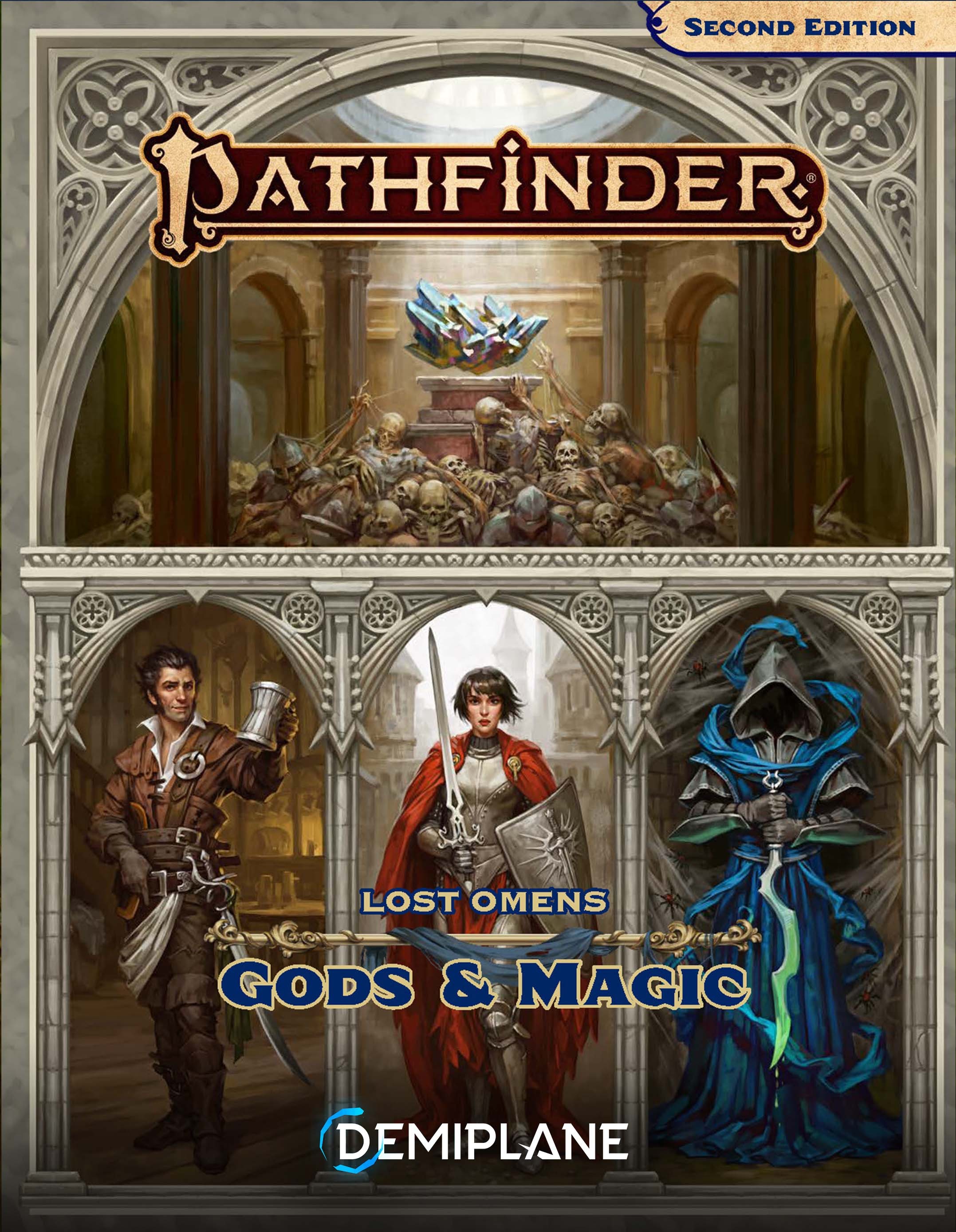 $39.99
Powerful Deities to Worship or Fear

No fantasy setting is complete without a pantheon of powerful deities for its characters to worship or fear. Whether you're a sneaky rogue asking the god of thievery for a blessing on your next heist or a valorous crusader calling the might of your patron down upon the forces of evil, faith and the forces behind it are key to every character's identity. Within this volume you'll find details on the gods and non-deific faiths of the Age of Lost Omens from the perspective of their clergy and lay worshipers. You'll also discover new domains, feats, and spells to customize your character, and an exhaustive index of hundreds of deities from the Pathfinder setting you can worship (and the mechanical benefits of doing so).

An indispensable 128-page resource for both players looking to flesh out their characters' motivations and Game Masters aiming to bring the evil cults, zealous evangelists, and holy warriors of their campaigns to life, Pathfinder Lost Omens Gods & Magic is an essential addition to any Pathfinder Second Edition campaign!

This overview presents a look at faith within the Inner Sea region and gives rules for changing faiths, worshipping non-mainstream aspects of a god, and making characters who were brought up with a strong grounding in a particular belief.

Gods of the Inner Sea

These pages present the 20 gods most integral to the culture of the Inner Sea region, as well as 20 lesser-known gods that are also commonly worshipped within the region. Conjure the mighty avatars of these beings as a sign of their favor, or see their wrath and blessings manifest in the form of divine intercessions!

Demigods and Other Divinities

Divinity springs from many fonts, and not all who grant their divine aid hold the vaunted title of god. From the capricious and fey Eldest of the First World to the raw power of the elemental lords, these unconventional powers embody narrower aspects than those who are considered true gods, but their followers are no less powerful for it.

With hundreds of cultures come a thousand schools of thought. Many find faith beyond the edicts of a single god, whether they seek answers through their ancestors or try to achieve salvation by accumulating vast wealth.

Where gods hold sway, they often clash, as the demands of the benevolent, the malicious, and the indifferent war with one another for the fate of lives and souls. This chapter presents benefits the gods grant their followers so they can better crusade in a hostile world.

This appendix presents the basic rules for over a hundred other prominent deities worshipped in the Age of Lost Omens, from the demon lords of the Abyss to the gods of distant Tian Xia. Each deity’s entry contains their alignment and the alignments allowed for their worshippers; complete worshipper benefits such as favored skills, favored weapons, domains, granted spells, and divine fonts; and the critical edicts and anathema of the faith. Entries also provide divine abilities to be used with the new background presented on page 9 of this book, allowing your characters to be raised in the secrets of obscure orders and traditions, from the mystery cults of Magnimar to the secretive worship of Asmodeus’s eight archdevils.