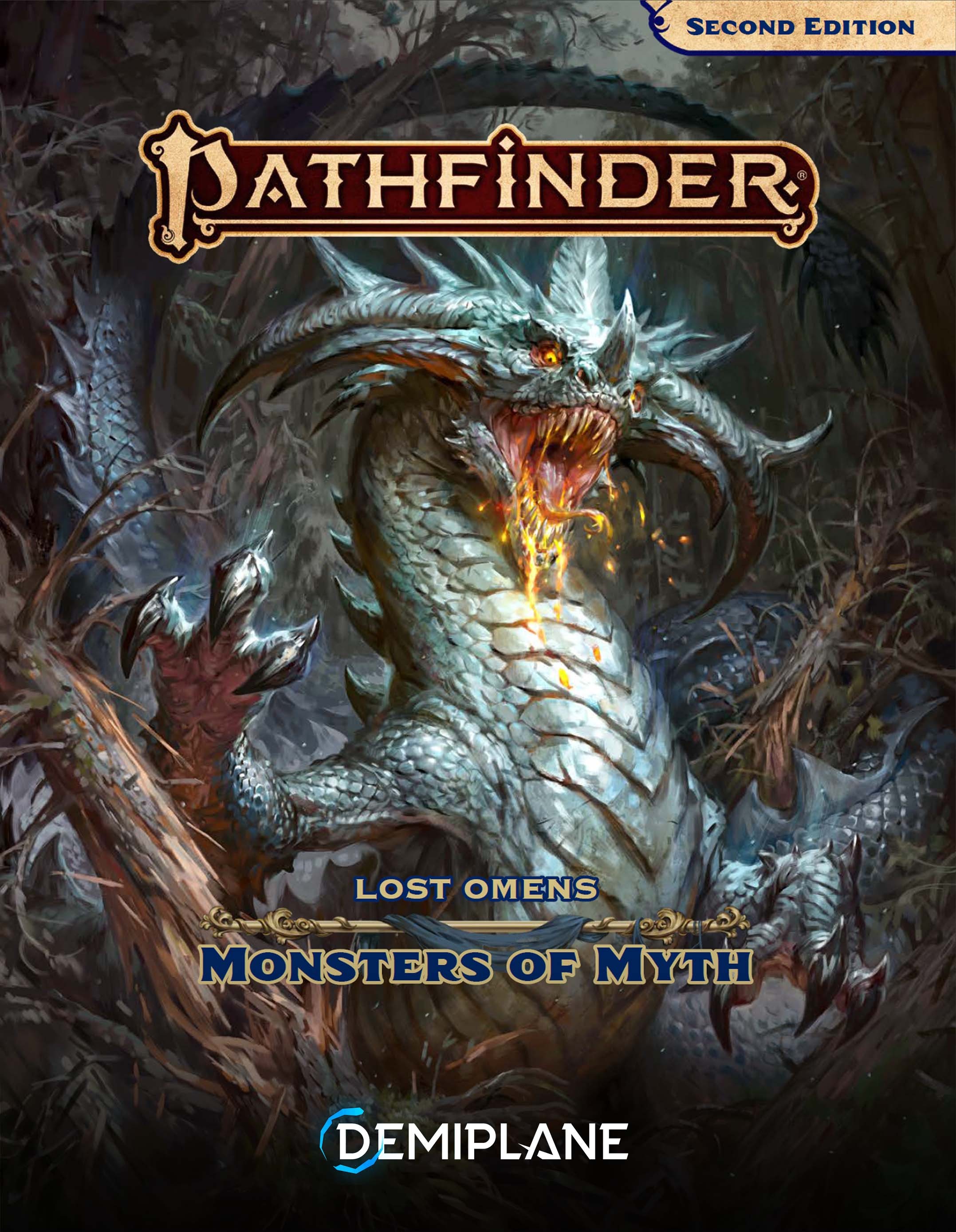 Heroes abound in the Age of Lost Omens, but for every great hero, there is an even greater monster. Lost Omens Monsters of Myth provides details on 20 of the most infamous and terrifying monsters from the Inner Sea region and beyond. Uncover the secrets of some of Golarion's greatest monsters from the Sandpoint Devil to Fafnheir, the Father of All Linnorms, and more. Monsters of Myth provides rumors, tales, and even treasures for the brave adventurers willing to face these legendary creatures!

Release the beasts! Heroes abound in the Age of Lost Omens, but for every great hero, there is an even greater monster.

I am Ainamuuren. My people are the saumen kar, though such was not always our name. Once, long ago, we were proud and foolish and free. We gamboled in the snow and shaped ice into our likeness, without fear of the dangers yet to come.

Though stories call it the Burning Dragon, Cuetzmonquali is a unique creature with no draconic heritage. Cuetzmonquali resembles an enormous reptile with large frills, two tails ending in massive stingers, and scales that appear to be made of burning flame.

The malevolent and ageless creature known as Desert’s Howl has haunted the Thuvian desert for over 3,000 years. Those who claim to have seen it describe a long-limbed, loping beast with an ibex’s horns and a gaunt, humanlike face with desperate eyes.

The greatest of all the linnorms to live on Golarion, Fafnheir came to Golarion from the First World. Over the centuries he has spawned many of the lesser linnorms who plague northern lands, and from his direct offspring, countless more creatures have arisen.

The Grogrisant is the name of the Imperial Beast, a colossal lion of vast power and majesty that roamed the Tandak Plains 6,000 years ago only to be slain by Taldaris I, founder of the Lion Throne. In the many centuries since, this lion—or new ones very much like it—has continued to appear.

Colossal creatures both terrifying and elusive, kaiju have roamed or visited Golarion since long before the dawn of civilizations, though their later entrances often ushered in the end of said societies.

The Kallas Devil is both a murderous torturer and a cultural icon for the town of Riverton, serving as an inspiration for nightmares and festivals alike.

The people of Vudra have not forgotten the terror of Kothogaz. Even while its existence fades into myth, the stories and songs are passed down faithfully from generation to generation.

Some say Krampus is the embodiment of shadows of envy, resentment, and selfish greed. Tall, goatlike, and horned, he’s said to have a hideous, snarling face; a long and greasy tongue; and coarse, foul-smelling fur.

Imprisoned in the Tagas Labyrinth, the creature known as Kuworsys might be mistaken for a crawling undead hand, possessed of two thumbs instead of one.

The sleepy Varisian town of Melfesh is a quiet, peaceful place, but centuries-old legends tell of a mysterious monster that lurks in the forest nearby.

She was a beast with a dozen legs—no, a cackling hag with wriggling vermin for teeth—or maybe a giant bug who sang sweet nothings to prey?

The Sandpoint Devil strikes at night, choosing a moonless dark or a cloak of fog and mist to hide its movements and heighten the terror.

Somnalu, the spirit-nightmare. It drew dreams into itself until all its legs and eyes grew back, until it was as mighty as it once had been.

Spring-Heeled Jacks are cruel-eyed, hairy fey with vaguely humanoid shapes and extra features that cause them to be easily mistaken for demons or devils. Glowing eyes, cloven hooves, menacing horns, and a pointed tail combine to create the mien of a wicked imp

Those who have laid eyes upon the Taljjae tell of a large, lithe body wearing a shimmering cloak of white and red tassels made of an unknown material, culminating in a wooden mask carved into grotesque parody of human expression.

The titanic crustacean wears the hulls of ruined ships as her shell, ripped into shape by vessel-rending claws, as nothing else in Golarion’s oceans is large enough to shield her body—or perhaps nothing else will satisfy her.

Though it superficially resembles a cypress tree and is easily mistaken for an arboreal or other similar plant creature, Temteki is actually an earth elemental, a creature of living earth and stone.

For hundreds of years, Ulgrem-Axaan has roamed the high reaches of the Shattered Range and the mountains west of Graydirge. Driven by an endless thirst for vengeance, it has relentlessly hunted and slaughtered all the undead it can find.

The skilled Artifacer, having replaced over half her body with scavenged and rebuilt parts, Ulistul is a patchwork juggernaut and stubborn survivor. Her pieces are in various colors, making it obvious even from a distance that not all her parts come from the same source.